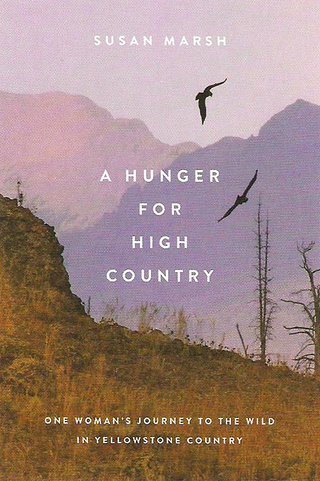 A Hunger for High Country

An excerpt from Chapter 1

One task was left to me before leaving Montana, to bid farewell to Windy Pass. A gap along the crest of the Gallatin Range, surrounded by mountains and perfumed by wild phlox and lupine, it was among the places that offered refuge during the past six years, one that could be counted on to bring me clarity and solace. It was the place I needed now.

I climbed into the thinning air and the forest gave way to meadows and scattered clumps of whitebark pine. The air was crystalline that first week in July, too early in the season for the wildfires of 1988 to erase the view of mountains on all horizons. The kind of day that should have made my heart swell as I reached the crest of the Gallatin Range.

But the scenery only deepened my sorrow as I looked across Paradise Valley to the corona of summits of the northern Absarokas. Memories—of backpacking trips and day hikes and ski tours—lay heavy in my heart. I was moving away and I knew I would never climb those peaks again. I turned from the mountains to focus on immediate surroundings: the sweet floral scent that came in waves from the lupine; the native grasses, like horses’ manes finely combed by a gentle wind. I dropped to my knees and forearms and pressed my forehead into the soft, forgiving earth, clutching tufts of alpine rush as if their wiry strength would hold me there. When I looked across the valley again the beauty was overwhelming, but something in me slammed shut like a metal door. After years of believing I had loved my job as well as that magnificent wild land, I saw the truth: I did not belong.


I meant to come to Windy Pass alone, but my final weeks in Montana were filled with packing boxes and attempting to sell the house that neither I nor my husband, Don, could bear to leave. As it happened, the local ranger district had arranged a tour of the Gallatin Crest Trail. My boss was not available that week, so Norm, the district’s trail manager, called to ask if I wanted to join them. I understood the offer as a necessary gesture, acknowledgment that someone representing the supervisor’s office should be included whenever the regional trail coordinator from Missoula was invited to the forest. The chain of command discouraged direct communication between a ranger district and the regional office staff, and with his phone call Norm revealed the breach of protocol that he was trying to repair. It was clear as well that he hoped I would say no.

“We have six people and six horses. Need one of them to pack the gear.”

Again the uncertain silence, during which I could have gracefully backed out.

“Okay then,” Norm said. “We’ll meet you at the trailhead at nine.”

Not enough stock, no room in the district’s vehicle. I knew the Windy Pass patrol cabin wouldn’t accommodate all of us either, so I packed a tent.

It was close to ten by the time the six-pack pickup and horse trailer arrived, followed by Bobby Morton hauling his own horses. Wendell, the regional trails coordinator, strode toward me with a smile and an outstretched hand, while the others went to work sorting out saddles and bridles, brushing equine bellies and withers, and spraying insect repellent. Wendell and I moved upwind.

“So you’re really leaving us,” he said. He and I had talked often enough about the way things were at the forest.

“Not because I want to.”

“Who’s going to make sure the district doesn’t piss away all this trail money they’re shaking me down for?”

He gave my shoulder a collegial squeeze and went to help pack gear. It was an excruciatingly slow process, and, assuming the horses would quickly catch up once the party got underway, I started for Windy Pass alone.

The trail began in the bright sunlight of a recent clearcut, where it was already close to eighty degrees. Welcome shade came at the edge of the cutover area, under lodgepole pines with thick, straight trunks and full crowns. An hour later I paused at an outcrop of volcanic breccia, its surface pocked with tiny holes where gas escaped from cooling lava. I looked down onto a patchwork of timber cuts and the narrow canyon of Portal Creek, tributary to the Gallatin River. The high peaks of the Madison Range soared above the Gallatin Canyon, their emerald wildflower parks at eye level from where I stood.

With no sign of the group behind me, I wandered slowly through the last of the lodgepole forest and into the open grassland below Windy Pass, dotted by clumps of fir and whitebark pine. When I reached the patrol cabin I left my daypack on the porch and continued on to the top. An acute ache grew in my throat as the sum of my situation that afternoon reflected the time I had spent in Montana: my separation from the group, the only one on foot, and—as usual—the only woman.

As a geology major barely out of my teens, I once looked around the classroom in math and physics courses to see few—if any—female faces. Instead of wondering why, I found some pleasure in the circumstance. I was a pioneer, smart enough to keep up with the boys in the so-called hard sciences. It had long been my ambition to keep up with the boys, from the time I was old enough to play with other kids unsupervised. Girls played inside with dolls, diminutive dress-up clothes and oversized high heels pilfered from their mothers’ closets, or make-believe houses constructed from furniture and bed sheets. When television arrived in the late 1950s, both boys and girls settled onto living room floors to watch cartoons and B-movie Westerns. These activities bored me and I escaped to the neighborhood woods and fields. I loved to walk on the packed dirt paths, to climb high into the smooth-barked branches of Pacific madrone, to beachcomb aimlessly while my parents dug for clams.

For the most part, I played alone, unable to join the boys in their pick-up games of softball because I was a girl, unable to endure the company of girls if it meant being indoors on a sunny afternoon. I remember one small victory—shooting at a coffee can and (to my great surprise) actually knocking it over with the plastic bullet, when the boy who owned the toy gun couldn’t hit it. A short-lived victory, as it turned out; after that, he wouldn’t let me try again.

Later, I sought the friendship of boys, partly because they were funny and easy to be around, and partly because their sports had begun to mesh with mine. I was the only girl in my high school class who could keep up with them on skis, and the one whose counsel they sought when having girlfriend troubles. I reveled in being accepted as a friend since it was clear that I would never join the clique of popular girls. Nothing frightened me more than the prospect of dating, which was handy for someone who was never asked.

One day before the Senior Prom, the principal caught me hiding out in the art room during the pre-prom school assembly. When I told him I wasn’t going to the prom and therefore preferred to miss the assembly, he stormed into the gym to berate the male segment of the student body. Reports from friends let me know that my name was used and for the rest of that week I slunk along the corridors for fear of some guy asking me out of pity.

I have often wondered about my fundamental affinity to the ways of males. I wore my hair long and even wore makeup for a time, and never wished that I had been born a boy. But I wanted to live like one, and be accepted as their equal.

By the time I entered graduate school I hardly noticed being the only woman in the room—it was something I took for granted. But in the Forest Service near the end of the 1980s, the lack of women among my colleagues angered me. Although I assured my non–Forest Service friends that the agency was becoming more progressive, it became increasingly clear that the opposite was true. I had witnessed a decade of backlash after court rulings required the Forest Service to hire more women. Some were treated with such resentment that they quickly found another path in life. For reasons I didn’t fully understand at the time, I chose to stay.

While well aware of the challenges for professional women everywhere in the Forest Service, the clarity of the sky over Windy Pass that day shone new light on how I had contributed to my particular difficulties with a stubborn defiance and plain refusal to conform. My mind filtered out the good memories from nearly a decade with the agency and rendered a bitter cup of defeat. So what was I now preparing to do but leave a place I loved in order to take another job with the Forest Service, where I would always be a square peg? What made me believe things would be different in Wyoming?

I could not imagine a better way to spend my working life than as a steward of public land, contributing to the conservation of wild country held in trust for all. But the ingrained culture of a government bureaucracy sent my imagined vocation tumbling like a boulder down a talus field. I wanted to step into the lupine on the crest of the Gallatin Range and keep walking deeper into the backcountry, never to be seen again.